Any Where In Bangladesh Posted 8 months ago Posted on ansar

The Ansar Force was established on February 8, and it became effective on June 9, when the Ansar Act was approved in the then East Bengal Legislative Assembly. Since then the training activities of this force have been held temporarily in Shahbag, Dhaka. In the war of Pak-India war, Ansar was deployed in the border guards of the country. After taking the oath of Bangladesh's first Provisional Government (Mujibnagar) in the War of Independence, the Provisional President was given a Guard of Honor by a member of the 12 Ansar platoon led by Ansar Platoon Commander Yad Ali. During the War of Independence, the Ansar forces were called rebels and abolished. Ansar members took part in the War of Independence with about 3,000 rifles. In the war, a total of 3 Ansar army officers, 3 personnel, and 5 Ansar were martyred. Three heroes of the force were awarded the title of Vikram and two heroic symbols. During the post-independence period, Ansar forces training activities were conducted in Savar from Dhaka, for 4 to 8 years. The Village Defense Team (VDP) was created 7 and the Urban Defense Team (TDP) was created on the 5th. Later, these two forces merged with the Ansar forces. In 7, the National Ansar Training Center (NATC) was established at Safipur in Kaliakoir Upazila of Gazipur district. It was renamed Ansar Training School. In 8, Ansar Training School was promoted to Ansar Academy. It was renamed Ansar-VDP Academy on the 5th. The force is currently being governed by Ansar Bahini Act-1 and Battalion Ansar Act-3, which, when adopted by Parliament, received the approval of the Hon'ble President on February 7 and went into effect from February 1. According to these two laws, the Ansar force is a disciplined force according to the provisions of Article 12 of the Constitution. 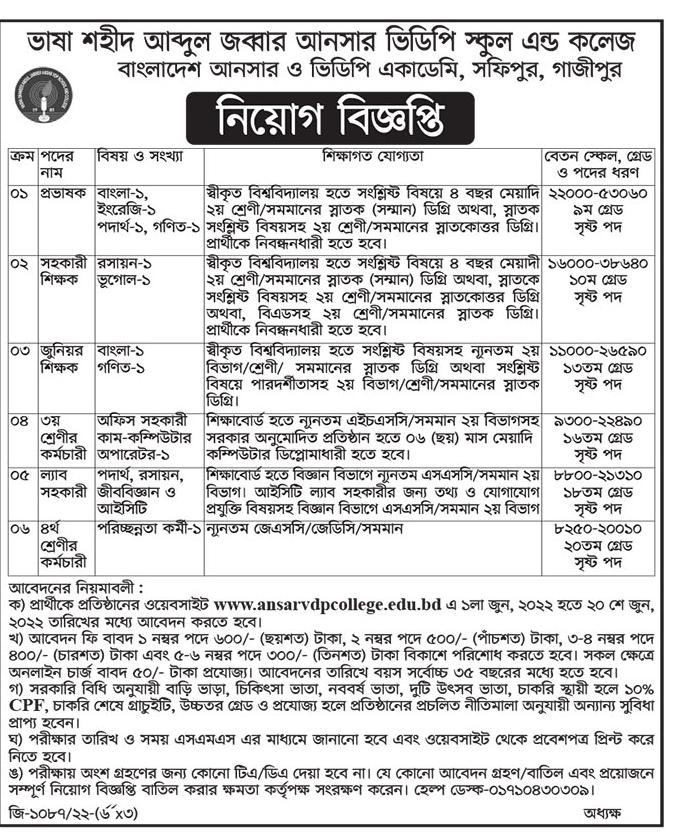